PM Modi opens Purvanchal Expressway; All you need to know the expressway-

Total Views |
New Delhi, November 16: Prime Minister Narendra Modi, on Tuesday, inaugurated the 341km Purvanchal Expressway in Uttar Pradesh’s Sultanpur, saying the district is the symbol of the state’s development and will strengthen its economy. 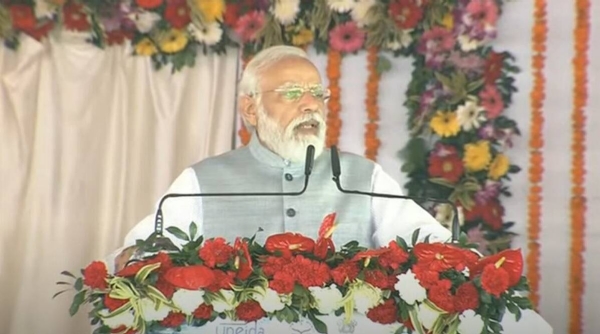 He said, “Those who have any doubt about the capabilities of UP and its people should come to Sultanpur today to witness their strength. Such a modern expressway has now come up where it was just a piece of land three to four years age.”
Purvanchal Expressway starts from village Chaudsarai in Lucknow district, and ends at the Haidaria village on National Highway number 31, 18 kilometres east of UP-Bihar border. The key feature of this Expressway is the 3.2 km long airstrip to enable landing and take-off of Indian Air Force fighter planes in case of emergency.
This expressway is 6-lane wide which could be expanded to 8-lane in the future. It is constructed at an estimated cost of around Rs. 22,500 crore, and set to give a boost to economic development of the eastern UP, especially the districts of Lucknow, Barabanki, Amethi, Ayodhya, Sultanpur, Ambedkar Nagar, Azamgarh, Mau and Ghazipur.
Also Read | PM Modi inaugurates India's 'most modern' Rani Kamalapati railway station in MP
Chief minister Yogi Adityanath, who was also present at the inauguration event, said, “The work of Purvanchal Express was completed in 3 years amid the Covid-19 pandemic. It will become the lifeline of the development of Eastern UP. Congratulations to the people of Purvanchal.”
He also said there is a focus on the overall and inclusive progress across state as part of a development push.
Also Read | Cabinet approves Rs 100 lakh-crore 'PM Gati Shakti Master Plan' for infrastructure
Purvanchal Expressway PM Modi Sultanpur UP Lucknow Indian Air Force