The Strategic Importance of the Sela Tunnel

The Sela Tunnel project will provide a new alignment on the axis towards LAC, and allow movement of military & civil vehicles throughout the year.

Total Views |
- Kinjal Yogesh Dixit
The strategically important Sela Tunnel project in Arunachal Pradesh is almost complete, as the project reached its conclusive phase earlier this year, finishing the last of its excavation. The project is expected to be completed by the end of this year, and upon its completion, the Sela Tunnel will boost all-weather connectivity to the Line of Actual Control (LAC) with China. 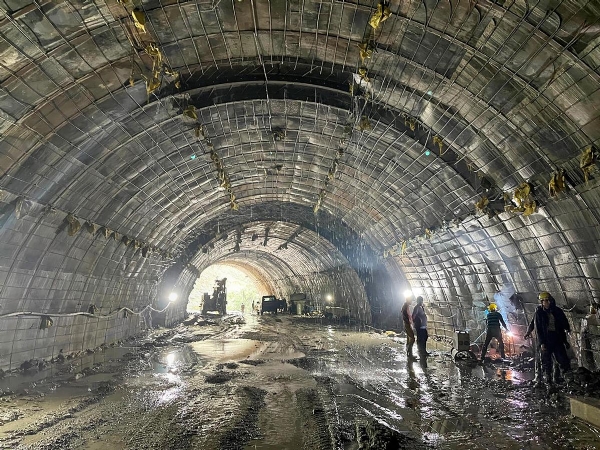 The Sela Tunnel is a Rs 700 crore project, but was earlier expected to be done by the June of this year. The project was announced by the government back in 2018; it is to be the longest twin-lane tunnel above 13,000 feet in the world! It will bring down travel time to Tawang by at least an hour as well as provide all-weather connectivity.
What this project includes: The project is actually being executed by the Border Roads Organisation (BRO) having two tunnels and a link road. While Tunnel 1 will be 980 metres long single-tube, Tunnel 2 will be 1,555 metres with a bi-lane tube for traffic and one escape tube for emergencies alongside it. This link road is to be 1,200 metres long.

The second tunnel is actually one of the longest tunnels to have been constructed above an altitude of over 13,000 feet. It also involves construction of an approach road of 7 km to Tunnel 1, which takes off from BCT Road. Moreover, it includes a link road of 1.3 km – connecting Tunnel 1 to Tunnel 2. The total length of the project, including the tunnels, the approach and the link roads, will be around 12 km.
Located in Kameng district of Arunachal Pradesh, the tunnel project will act as an alternate axis to the Sela pass, which is at 13,700 feet. It will be on the BCT Road - the Balipara, Charduar and Tawang axis, which is more than 300 km long. The estimated cost of the project is Rs 700 crore.
The tunnel is one of the most important ones being built right now, and that is because of it’s all-weather connectivity to Tawang. This will be the most important advantage that the project offers. At the moment, Sela pass stays closed for the winter months. The project will provide a new alignment on the axis towards LAC, and allow movement of military & civil vehicles throughout the year.

When the govt laid the project’s foundation stone back in February 2019, it highlighted its 3 benefits - “All weather connectivity to Tawang and forward areas”; reduction in “more than one hour of travel time from Tezpur to Tawang” and travellers avoiding “dangerous snow-covered Sela top at a height of 13,700 feet.”
Also Read | World's longest twin-lane tunnel being built in India at Rs 700 cr; to be completed by year-end
The government also added that the all-weather connectivity to Tawang would be a game-changer for the locals, apart from providing strategic advantage for the security forces. Once complete, the tunnel will remain open for 12 months of the year, allowing speedy military deployment for reserves.
If we look into the progress, the project is nearly complete. After the foundation stone was laid by the Prime Minister in 2019, the first blast of Tunnel 1 happened in January, 2021. The last blast for the 980-metre Tunnel 1 happened in January this year, marking the “culmination of the excavation works on the complete Sela Tunnel Project”.
The breakthrough blast for Tunnel 2 was carried out in October of 2021. During the same time, nearly 50% of contractual work had been completed. When it comes to physical progress, while for Tunnel 2 and its parallel escape tunnel, the excavation had already been wrapped up, for Tunnel 1, the work was 80% complete back then.
Recently, Union Minister Kiren Rijiju, who is a parliamentarian from Arunachal West, took to Twitter, saying that a project like this was “unthinkable” a few years ago - “Sela Tunnel located at close to 10,000 feet height in Arunachal Pradesh was announced in 2018-19 budget, foundation stone laid by PM @narendramodi Ji in Feb, 2019 and now, it's almost ready for the inauguration within three years!#NewIndia."
Around 50 engineers and 500 workers have been directly involved in the construction of the Sela tunnel using the latest Austrian tunnelling techniques.
Sela Tunnel Arunachal Pradesh BRO Guinness World Record Rajpath Infracon Pvt. Ltd. Guinness World Record Rajpath Infracon Attempt to World Record by Rajpath Infracon National Highway World record Attempt for National Highway world record NH6 World Record on NH6 Infrastructure Akola-Amravati National Highway PM Gati Shakti Azadi ka Amrit Mahotsav GWR Infrastructure World Record India@75: Azadi Ka Amrit Mahotsav