PM Modi observed that the foundation stone of 5 National Highway Projects and 7 Railway Projects have been laid in the state; he also praised the 100% electrification of Konkan Railway

Total Views |
Bengaluru, June 21: Prime Minister Narendra Modi inaugurated and laid the foundation stone on a number of projects worth more than Rs 27000 crore in Karnataka. 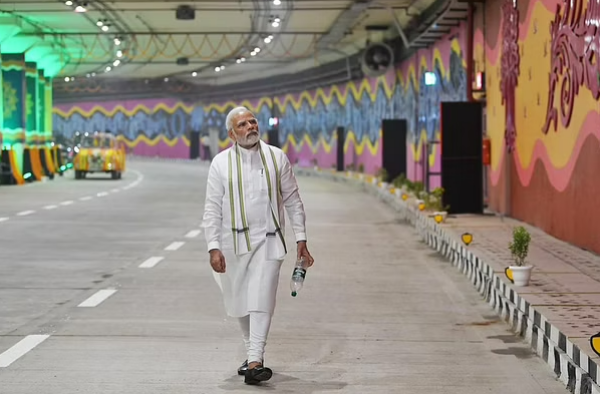 While speaking to the gathering, the PM observed that the foundation stone of 5 National Highway Projects and 7 Railway Projects have been laid in the state. He also praised the 100% electrification of Konkan Railway.
Speaking further about various infrastructure projects in the state, PM Modi observed that the Bengaluru Suburban rail project will play a major role in linking Bengaluru city with its suburbs and satellite towns, leading to a lot of benefits for the people, and that the Bengaluru Ring Road project will help in reducing the congestion in the city.
Heaping praise on the state government, the PM said that the latter worked on a complete transformation in rail connectivity in the last 8 years.
Also Read | Target to construct 60 km of highway per day: Nitin Gadkari
Noting that Indian Railways had become faster and cleaner, he said, “We have taken the rail to those parts of the country where it was difficult to even think about it. Indian Railways is now trying to provide those facilities and the ambience which was once found only in airports and air travel. The modern railway station in Bengaluru named after Bharat Ratna Sir M. Visvesvaraya is also a direct proof of this”, he said.
While pointing out integrated multimodal connectivity, he observed that the same is boosted by the PM GatiShakti National scheme.
PM Modi Karnataka Bengaluru Infrastructure